Topology... why isn't this working anymore.... 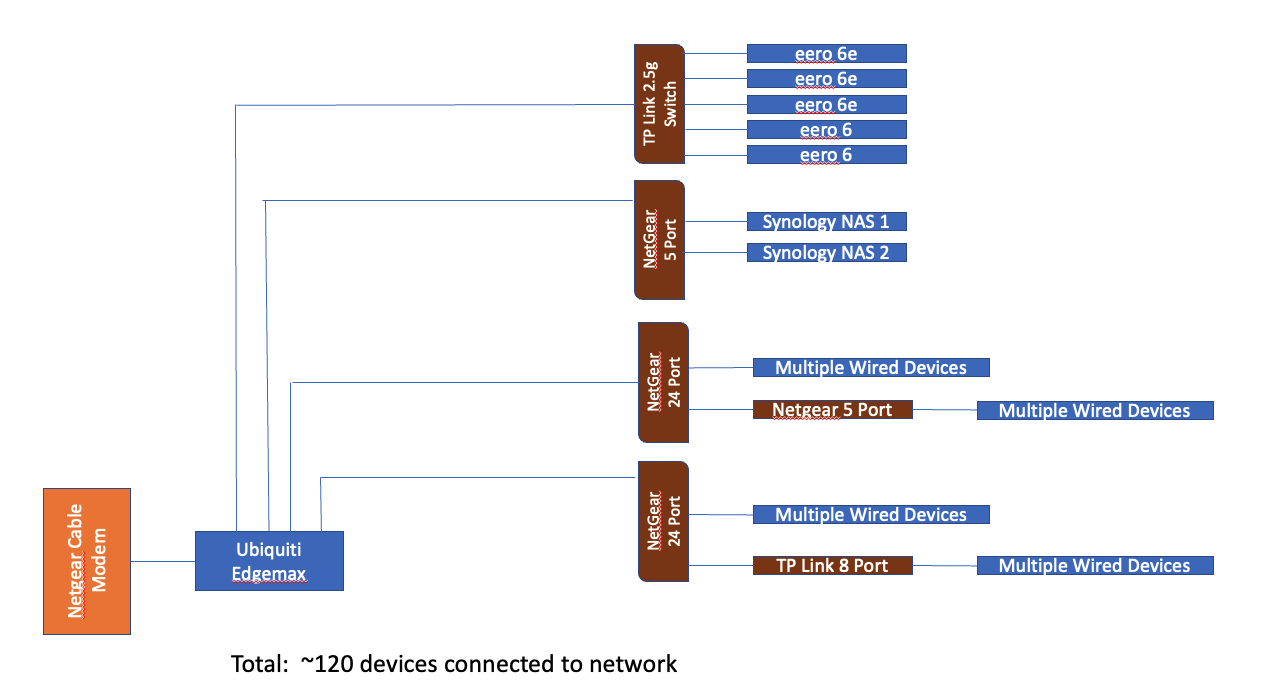 So I have been suffering with the absolutely nuts packet loss issued mentioned here:
https://community.eero.com/t/y4hj10g/what-have-you-done-insane-packet-loss

I have had eero nodes for over 5 years, if not longer.  All in bridge mode.
I have had as many as 7 nodes connected top provided connectivity to the house, especially at the start of the pandemic when I was support 5 at home students.

About 9 months ago, it has gone to crap, and the stability of the network is all over the place.   I will get a total loss of traffic on the wired and wireless network, sometimes just the wireless.     The only thing that works to restore, is power cycling ALL the eero nodes.

I added the TPLink 2.5g switch to the mix and re-wired some runs, so each eero, has it's own home dedicated run, with nothing else attached to them via wire... no fix.

I am at a loss.    In the images is my current topology, which should totally work.  And did for YEARS.

The 2nd image is what eero support is suggesting I do, to resolve the problem.
And I am scratching my head on how it is supposed to fix anything, other then have ALL my traffic go through the one eero node.

I am NOT using any of the software feature that eero has added the last several years, I don't need it or want it.   I just want the mesh WiFi access points, that eero did very well for every long.

I am nearing the point, that I am just going to scrap it all.. .and rebuild with Ubiquity or something else.

We rely on this network for use about everything in the house (24+ smart switches and devices, fire detectors, water sensors, cameras), Alexa, Google Home, streaming TVs, wireless devices, PC's, printers.      yes, I am by far an above average home user, but this should and did work.

I have tested every home run to rule out a cable that has gone bad.
I have replaced some patch cables that "may" have been compromised.
None of that has changed anything.